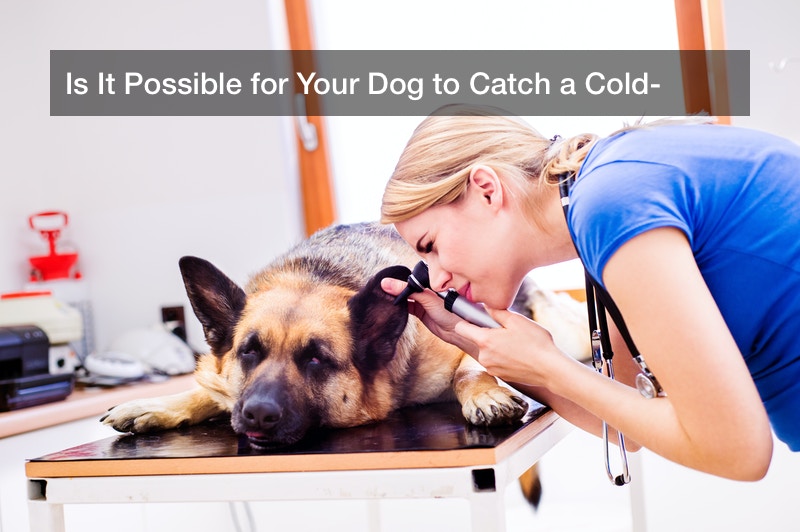 Pet owners understand the bond between them and their animals. Research shows that 92% of pet owners spent either the same or more on their pets during the last recession. With that in mind, much of this spending is to ensure that your dog remains as healthy as possible. Considering that, you might more than a little worried after noticing your dog experiencing strange behavior. After seeing this, many pet owners wonder if their dog is dealing with a cold. Read on to find out if dogs can catch colds.

Can Dogs Get Colds?

As a pet owner, it’s understandable to think about your dog’s health. With that in mind, you might feel concerned about seeing your animal sneezing, coughing and experiencing similar symptoms. While seeing this type of behavior, it makes sense to wonder can dogs get colds?

The correct answer to the question can dogs get colds is no. Dogs can’t get colds from humans. Fortunately, you can play with your dog while having a cold without having to worry about getting them sick. This is because many human diseases simply do not affect a dog’s immune system. With that said, dogs are susceptible to contagious illnesses. Like humans catch illnesses from other humans, dogs can become sick from being near ill animals.

Catching Illnesses From Other Animals

It’s important to learn about what illnesses your dog needs to avoid. With that in mind, make sure your dog avoid being around others with a condition known as kennel cough. Unfortunately, this illness is extremely contagious. Making matters worse, symptoms of kennel cough are almost identical to that of a human with a cold. These symptoms include coughing and excessive gagging. Fortunately, kennel cough is treatable by visiting a vet. This allows a vet to prescribe medications that will help your dog get rid of this condition. Certain pet owners have dogs that love being around other animals. While your dog is recovering from kennel cough, you’ll need to make sure they avoid other animals for a while. Speak with your vet to find out exactly when your dog will no longer be contagious.

Common Signs of a Pet Emergency

While kennel cough is important to treat, there are other types of pet emergencies you’ll want to know about. These conditions include rapid breathing, difficulty standing upright, seizures, and going in and out of consciousness. If your dog is experiencing any of the previously mentioned symptoms, get them to a 24 hour animal hospital right away.

To summarize, it’s understandable to wonder whether or not dogs can get colds. To ensure your dog remains in good health, schedule appointments with veterinary services. During your dog’s puppy phase, this animal will need to receive vaccines every three to four weeks until they are 16 weeks old. After this, vets recommend bringing in your dog for a yearly checkup. However, as your dog gets older, you’ll want to bring them in once every six months. If your dog seems to feel under the weather, it’s a good idea to be safe and bring them into a veterinary clinic.